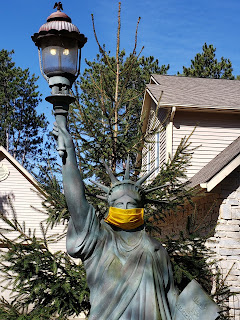 We hear it every day, we are all in this together. Teamwork and all that. So I looked around to see who was on my team and decided I am the Captain of the Quaran-team! Since there are no real sporting events going on this will have to do. Not that I ever really cared about sports unless it was the last two minutes (really like 30 minutes) of football (of that last game of the season), or the final hour of the Masters, or whatever equivalent there to the “is it almost over” moment for such activities. Saying this in Stark County is like inviting an arsonist over for a cookout, but since ya’ll are having to stay home, I’m good until the order lifts.

My hubby is the General Manager. The person around who oversees the operations but lets the team do its thing. Since he is out there on the front lines everyday keeping those moms and babies safe, his job is just a bit distracting right now so we let the front office not worry about what is happening in the locker-room.

So who is on the team? Our oldest member is Sadie. Nicknamed Tades (rhymes with shades) because at one time this scrawny cat was rather chubby like a big old twice baked potato. Pushing 18 (about 90 in cat years), she is boney, pukes a lot and being deaf, whines all the time. Sort of like having a skinny toddler around who can still jump on the counter and tables. I guess she can be the annoying assistant coach who yaps and yaps at the other players but really doesn’t do a whole lot.

Next is Cersei, the rescued Maine coon cat who was a mass of matted fur, burrs, sticks and icks when I almost tripped over her at Bottler Park. So named by the GM because she had to be shaved off and spent her first two (or that was the plan) nights in the ½ bath (throne room). She had other plans however and broke down the baby gate ….we should all be amazed after 30 years that I still had a baby gate!...and made her way to the bedroom, claiming a rightful chunk of the mattress. She hasn’t moved very much since then, now about 3 years or so.  As skinny as the other one is, this girl is a roly-poly.

The bulk of our team is comprised of the dust bunnies. No social distancing for these little boogers. They are gathering like barnacles on the bottom of a battleship, scurrying from one corner to another all day long.  Their motto must be strength in numbers. A lone tumbleweed of cat hair goes floating by and out shoots a bunny, grabs that tuft and adds it to the arsenal under the sofa. I suppose I should do something about them…..when there is the outside possibility that we will have guests inside other than the Orkin man and he doesn’t care. Maybe I can organize them into a drill team, Bunny and the dusters. Speaking of which…

Our team spirit really is one. This neighborhood is built upon Paleo-Indian settlement land. Many of them have not left the area. One resides in my house. Confined to one room and quite friendly actually, we have co-existed peacefully for 28 years. Others sensitive to such things are aware of him, those who are not, never notice. I leave out swifter dusters in hopes he gets around to knocking off the dust bunnies that are way up high in the corners (who decided 2 story rooms were a good idea?) and those eyelash thin strands which form between the moose antlers. Mostly likely he is in cahoots with those bunny boogers, creating ever so fine artwork visible only when the sun shines in before the leaves come out and block those revealing beams of brightness. Mind you I appreciate a well-constructed web as much as anyone, but that is a short term installation piece and the artist who creates it is made famous rather quickly by his rapid demise. An appropriate burial at sea soon follows.

Finally, we have the occasional walk on player from the nearby woods. Cersei however is not too fond of undocumented additions who dare cross the threshold and will roll off the bed (most likely just squashing the little critter) and take credit for what the Orkin man was probably most responsible.

I suppose the manikins could be on the team. Half a dozen headless body forms hang out in my back studio along with a bag of Styrofoam wig heads.  Okay, that sounds creepy. Best to keep that squad in the equipment storage room. Other than that, it is pretty sparse around here. One indoor plant, a scraggly looking cactus that has been around forever and gets water every so often when I think about it, which is why no other plants are indoors. Plants are meant to be outside where watering is God and Mother Nature’s responsibility. The Garden of Eden was outside so that is good enough for me.

Speaking of the outside, team Red Tail Hawk takes on Team Crow or Team Blue-jay on a regular basis. That is entertaining though very noisy. Team Chipmunk was knocked out long ago. Team Earthworm dried up when I laid bricks and left their dirt homes on the driveway…in the sun.  Team Squirrel doesn’t play by the rules, making end-runs up the bird feeder and Team Ground hog keeps becoming Team Ground Chuck since they have yet to figure out a thing called traffic (although there is now much less  traffic so Team Ground hog is gaining some ground).
All in all, our Quaran-Team is doing pretty well. Sincerely hoping the post season starts soon. I hope your Team is doing okay too. As a follow-up, I did make a second loaf of banana bread, (living dangerously by adding a third rotten banana), but forgot to add the vanilla because it wasn’t in the “add to” list. So I just mixed it in after the loaf was in the oven for a bit. My kids gave me a “5 ingredients only” cookbook. Stay tuned, this could be old school math or today’s common core method!!….now go wash your hands.