Are we really this inept? 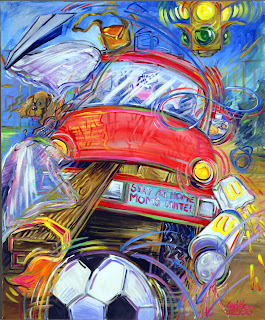 *I was going to post this yesterday but since examples just keep on coming……(sigh)…one day won’t make a difference.
The current national spelling bee competition has me thinking about words once again. I’ve found one that needs shared because evidently we are all this word...and that word is….”stupid”.  Or so “they” must think we are or are working very hard to make us such. Allow me to point out a few examples, as definitions mind you, just like the spelling bee allows so a word can be understood in context.
On the radio this morning I learned that NYC is proposing a ban on soft drinks (and related fluids containing sugar) being sold in quantities larger than 16oz at venues which sell food.  Why? Because evidently we are too “stupid” to realize that a larger one would contain more sugar and sugar is “bad”.  Since when did things that are “larger” not contain “more”? Is there some kind of new math going on that I missed? But the growing problem of posteriors growing must be contained somehow so no large drinkie for you my friends in NYC!
How about this example found in today’s paper….a local community is “requiring” all residents to use one company for trash collection to make life simpler and the roads safer.  The community leaders want people to know to cancel any private services because they will get two bills if they don’t! Um….. what about the issue of choice and free enterprise? What if a resident in the community works for company A that is now begin forced out by the decree of company B being the new provider? So company A guy has to use company B so their poor little roads don’t get used too much?  Since when did roads become something not meant to be used too much? Maybe if they were built right in the first place….oh whatever.  We have given up so many choices by now anyway without many people even realizing it because they are…..oh dang, what’s that word?
And then there is this gem….a few weeks ago an article appeared about student loan debts. One young lady was very surprised and upset that she had to pay back her “loan”.  Yes, she knew her college of choice was really pretty and very expensive but so what? She says the college recruiting people made it so great and wonderful that the thought of paying for it was never an issue and how could they think that she would know to pay back the money they were giving her? “That’s not fair!” she cried. Evidently she did not major in accounting or finance and the thought of using her degree to get a job to earn money to pay back the “loan” is not an option because “that is not fair”. Huh?
*One more from this morning….do we really need to have a law which tells people not to drive a 2000 pound bomb while writing little snippets of unnecessary communication to others? No texting while driving should fall under common sense, not legal restriction (altho I am in full favor!!) since gasoline, glass and steel don’t mix well with handheld devices of any kind, especially when traveling at a high rate of speed....maybe we could rename that the “big bang theory”?
Believe me, there are examples of this every day, everywhere.  Forrest Gump understood the meaning of the word and I bet he never participated in a spelling bee. General Russell Honore (Hurricane Katrina fame, look it up) has a famous quote directed at a reporter which clearly shows he understands the meaning of the word.  Personally, I am almost out of duct tape to put across my mouth (or across my keyboard) so as not to put into print or out in public just how often this word makes it presence known on a daily basis.  Maybe I am just getting old and cranky and curmudgeonly because there is a lot more in my rear view mirror than on the road ahead unless I live to be 101 (which could very well happen come to think of it….) Forget the stockpiles of water or foodstuffs or ammo, I am going for the duct tape (and light bulbs….an issue we have touched upon here before), because I have a feeling that “stupid” is the dandelion of our national landscape.
Posted by Judi Krew at 8:10 AM No comments: