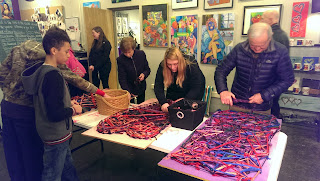 Another First Friday has come and gone…..and I have to say that this one was the emptiest I have ever seen. Perhaps the weather kept people away (even thought this has been the mildest winter in my lifetime). One man said he won’t be coming anymore because he has to pay to park nearby (and the suburban folks don’t like to walk far in the dark and scary downtown). No major sporting events were on the calendar, no political debates on TV, not a holiday weekend…..for whatever reason, people just stayed home.  All that being said, the Snarky Art/Journey Studios had enough visitors to complete three projects!

This month’s Community Participation Project was entitled “Heart Strings”. Basically yarn and nail art on steroids.  Three panels were provided along with 155 yarn balls for visitors to wind, weave and entwine around their choice of designs, a rectangle, a heart or a free for all scattering of nails.  Think of it as one for those who like order, one for the realists and one for the non-conformists.  Some tried to make specific images like stars or symbols only to find their creations layered and altered by those who came later. As always, a big thank you to all who came out to play. We have a regular following now so I have to be on my game with new and creative ways to engage you!

Before I get to the question of the month, a few observations on human behavior (my favorite topic!) Su and I have both recently traveled, she for the first time on an airplane in a long while. I fly often enough that I don’t even pay attention to the process anymore, just lemming along like a good little passenger. Su shared something I had not thought of in a long time….. you know how we are allowed only three bottles of 3oz liquids (supposedly inside a clear zip lock.)?  Why? Because a liquid could be an explosive (like shoes and underwear remember?) so anything bigger than a 3oz liquid gets confiscated…and tossed into a trash can by security.  Ummmm… as Su pointed out, if that 4oz or larger bottle of mine had been a “real” explosive, it just got tossed into a container sitting in the middle of hundreds of people just standing around…waiting to go off.  Think about that….she’s right. Hmmmm…..

My only recent question on airport travel is how come they don’t utilize those big LED signs with constantly changing messages (like one sees at the carwash, the drug store, the gas station, outside churches etc….)  to inform people of constantly changing information (such as which line is open, which is not, what document is needed out). The  frazzled lady waving a colored sheet of paper and yelling at a hundred frazzled passengers trying to find luggage and make it thru customs so as to not miss a connection just seems outdated.  One last comment, common core math does not apply to the “one carry on and one personal item” statement. That is still 1 + 1 = 2. Two, one for each hand you have on your body.  One above and one below.  Arguing that “my purse is not a personal item” even though it is the size of a suitcase, will not fly with your fellow sardines. Pun intended. Check the thing lady before somebody checks you. Okay moving on…..

Question of the Month: What is the name of the teacher who made the greatest difference in your life?  (Notice that I did not specify whether it was a good or bad difference, although most took it as meaning positive.)  64 responses, and I apologize for any misspelled names, some handwriting is difficult to read.