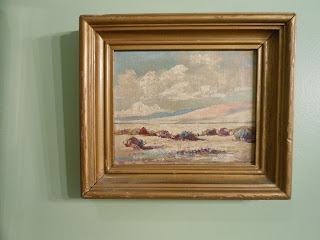 I am no legal eagle that’s for sure, but I would think that finding my work on a photo-sharing website which allows people to purchase prints and make cards DOES violate my rights somehow. One of those late evening “google yourself” moments turned up an image of mine from a national show. The juror from the show was the host of the gallery of images on the commercial site which included all the other work of the participating artists. Yes, we do sign a form stating that our images can be used in publicity or in materials related to the show (such as educational brochures etc…) but I don’t believe that should cover allowing the juror to post the show on a commercial site where print purchases can be made.
This all too easy electronic age of sharing has gone too far in my humble opinion. Others may be starting to agree. The case of the Rutgers student found guilty (and facing 12 years in prison) for videoing his roommate and sharing it to just a few others, leading to the suicide of the victim is just one example. Enough is enough.  In my studio space are signs saying “no photography” and yet at least once a week, people take out their cell phones and shoot a picture or two. Seems these people do not equate a phone camera with a “real” camera therefore they are exempt.  Or in the age of “I can do what I want” attitude, rules just don’t apply.
If I choose to post an image on my FB, then I am assuming the responsibility that it could be shared worldwide. That goes for all those “private” photos you all think are protected. Just because I am not your friend, does not mean that we don’t have one in common who has shared your images with me and I can then share them with others who may not like you so much.  This latest incident may put an end to the posting of my work on FB or any site other than a website under my own control.
I wonder how many other pieces of my work are out on photo sharing sights or other commercial venues.  Reading through the pages and pages of legal stuff which is typical of most sites and skipped over my most of us to just check the “I agree” box and move on, I did locate the law firm which could handle my complaint and a whole host of rights and repercussions that benefit me as the legal owner of the work and affect the person who has claimed copyright to my work by having checked “I agree” under false pretenses (aka ignorance of the law). Is it worth my time and effort? Probably not, but I did notify the site about having found my work and not authorizing it, to which they responded VERY quickly, and I notified the show chairman with a direct link suggesting that the other artists be notified as well. If we don’t have rights to our own work, what do we have?  If this was an authorized usage, I need to see that “I agree” part of my submission form. After two readings, I have yet to find it. The papers contain lots and lots of stuff about sizes, dates, original work, prices, shipping blah blah blah, but no place does it say my images will be posted on a commercial site and sold as prints or cards.
Maybe I am getting too old for this business. The frustrations which arise on a constant basis are beginning to take their toll. I am starting to understand why the quick and easy down and dirty method of making art via computers and with multiple levels of visual assistance is so appealing….too many hours need to be spent on the paperwork, the legal work, the searching for violations…..so much so that valuable studio time has to be spent tracking down the unethical and the illegal.
Long story short, perhaps we need to realize that no matter what we think is “ours” as far as our imagery is concerned, it is really not nor ever can belong to us. With this electronic age of easy access and distribution, somebody someplace can profit off of it whether we know it or not. Artists…..beware.
Posted by Judi Krew at 11:22 AM 2 comments:

The Catharsis that is Couture 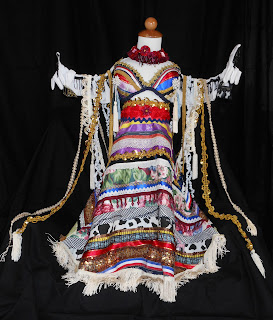 What can be said when words leave us? 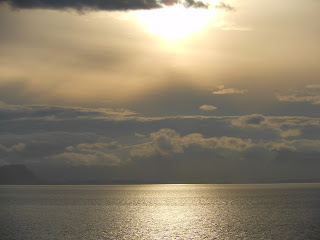 Several blogs have been started and stopped all week. In light of yet another case of a gunman in a school, and the subsequent deaths of three innocent young men, I could not think of something to say. A few rants came to mind but nothing which has not yet already been said.  Where lays the blame, the faults or the shortcomings? Could we as a society have done something? The problem is…we have and we did.
Intruder drills in schools, programs on bullying, government initiatives up the wazoo, counseling centers, gun registrations, metal detectors, in school services, out of school services, alternative school services, warning labels on products, parental controls on computers and TVs…..airbags, seatbelts, food content listings, pills for just about anything, free shots and ID cards…..what have we missed?  There are no real answers and no real solutions. At some point in time, it will happen again, no matter how much we try to prevent it, prepare for it or watch for it.
Some would say, this type of thing did not happen in my day! I would beg to differ. It probably did, only we did not hear about it when only three channels were on TV (heck, even before the invention of TV), when mail came by personal carrier, I could go on.   With the addition of so many labor saving and time saving devices, we have so much more “free time” that seems so occupied that stresses have filled voids once used to walk to the store, weed the garden, bike to a friend’s house, hunt frogs in the woods, write letters to pen pals.  Does anyone remember what a pen pal was?
I cried along with the parents and kids on TV Monday. I felt guilty and did not know why. I was glad my kids were no longer in high school.  I suppose someday we will know “why” this time, just like we got “whys” for all the previous incidents. If we changed to meet the reasons given, why did that not work this time? Rhetorical question, we won’t ever know and we won’t ever really be ready. We can pray. We can listen (not just hear….but listen). We can get involved. I should have last weekend or so I thought.
On a street corner in Toronto, I watched a young girl of about 16 screaming and ranting into her cell phone. She was hysterical about something which turned out to be that her boyfriend, who was to meet her on the corner, was on a different corner across the street and she could not find him. At the time, neither of us apparently knew he was so close. I watched the tears stream down her face and the panic overtake her to the point of shaking and flaying her arms about. Many, many people passed by her looking…was she on drugs I wondered, as she was a bit scary and perhaps violent.  She was thin and pale and very under dressed for the cold winds. On the same corner was a street preacher and his minions with microphone in hand preaching about God and helping others etc…yet here, not 15 feet away is a young girl obviously in need of some help and they were ignoring her, partially because she was upstaging their rally with her antics. One young man on a bike, much bigger than she, did stop and ask if she was okay. I watched that exchange carefully as natural maternal instinct kicked in. Finally, as I got up enough courage to approach her she bolted across four lanes of traffic towards a young man who was not much bigger than she.  I expected a joyful reunion. What I saw, and caught on camera, was a young woman who proceeded to almost physically assault this poor kid, screaming, yelling, flailing about, crying, hitting, swinging her bag around and on and on until they faded into the crowd. He never reacted, she went berserk.
What we think we know, what we think we see, how we think people will react, we can’t believe any of it. We will never understand what lies inside the mind of anyone else. We can’t predict, we can’t prevent and we can’t truly prepare for what we don’t know. We can pray however, anytime, anyplace, anywhere and for anybody. Some One somewhere is listening.
Posted by Judi Krew at 9:12 AM No comments: