Once again, Studio M at the Mass Mu is exhibiting the works of students enrolled in Photojournalism at Walsh University. 18 images are on view and well worth the time to stop by. Professor Lee Horrisberger has taught her class well.  In a world were almost everything is “caught on tape”, selfies saturate our servers, and images can be captured instantly on a cell phone, the role of photography as an informational art form is becoming somewhat of a dinosaur. Considering the long and rich history of photographs as our source for emotional connection to situations where words cannot say enough, it is refreshing to see students challenged to keep this tradition alive.

A large statement is posted just inside the door so I will skip the details of the specific assignment. Students were allowed to use “cameras, computers and photographic equipment from Walsh’s Communication Department to imitate the style, lighting and content of a photojournalist of their choosing.” Next to almost every image in the show is an explanation by the student as to why their journalist was selected and how a specific work by this person influenced the image you see. I would recommend that these comments be read in order to put the student photographs into their correct context.  One must keep in mind that these are intended to be emotional pieces that convey a story visually, not just “pictures” of people or things. But this is Snarky Art so I chose to see them also as independent works of “art” because this is a show rich in happenstance and the merits of just good old fashioned fundamentals.

As with any show, there are gems to be found and I will touch upon a few as we progress. Since space (and your attention) are limited, not everyone will get mentioned but all the works were deserving of comment. Several pieces already had red dots on the tags and my visit was the day after the opening!

Working around the room from the statement and going counterclockwise (because I know you print these blogs out and take them with you to follow along…right?) Brook Morgan (Jr) presents “Avery”, a study in crisp contrasts of black and white (on several levels) that captures a moment in time. Inspired by Sally Manns, Ms. Morgan’s subject does not look at the viewer but rather pulls us out of frame to wonder what caused the reaction we see on the child’s face. The child’s emotion is contagious.

Ronnie Stokes (Jr) whose piece is entitled “Zac Carter” is more than a journalistic project, it is also a study in the layering of triangles, whether intentional or not. Three bright “stars” of light forming the first such triangle are the teeth, the earring and the logo on his hat. If one continues to look for smaller and smaller triangles they are easily found. It is this underlying fundamental element (shape) of composition that elevates this piece and gives it bones.

Kaci Bucklew also has a basic element of art (space) which creates a layer of interest most likely unintended, hence the role of happenstance. The figure in “Matthew Lenz” is holding a longboard, the intended subject of the image, but the placement of the figure to the right leaving an empty space on the left, his eyes looking left, and a horizontal tree branch in the background located almost at eye level, all pull the viewer out of frame to wonder what is happening elsewhere. What is the rest of the story? Perhaps other skaters? I believe the board was to be having it’s portrait taken, but the figure holding it in place is far more intriguing.

Tyler Dowd (Jr) has a well written narrative of how he captured his graffiti image which leaves the viewer wanting more of the story when paired with the picture.  “Hole in the Wall” is just the beginning of an interesting journey on the part of the photographer. Whose work did he capture? How did it get there? Why was it done? All these questions are left unanswered…….the picture made me want to search for clues.

Dallas Makowski (Sr) was inspired by Neil Leifer’s image of bowling. Mr. Makowski’s “New School” appears to be a well thought out response to the formal elements of his chosen reference photo but to capture the moment in time of a bowling ball midway between the release and the lone pin at the end of an alley, is not something planned. Perhaps luck played a big role in how this study in contrasts works so effectively, but it does, and photojournalism is sometimes just all about being in the right place at the right time and pushing the shutter button.

Jamie Woodburn (Jr) had that same good karma with her the day she set out to capture sunlight. Inspired by Eliot Porter, one of the first photojournalists to work exclusively in color, her image “Sunlit Forest” reveals more than was perhaps intended. A strong visual piece as it is presented, look a bit more closely and one will see that she was not alone in the woods. Directly below the burst of sun (something that happened suddenly on a cloudy day according to her narrative), two trees form a cross (X marks the spot?) and within the negative space formed by those trees, a “face” can be seen in the shapes and patterns. I found more faces than the one which is most obvious. Yes, the intent was to capture light, but the almost holy intensity of the sunburst itself also gave us life in the forest.

Finally, I want to acknowledge the work of Alejandro Meza (Soph) and his piece “Never Ending Pathway”. As an artist, I was drawn to his overwhelmingly strong use of line as pattern in this image that depicts a man walking in a snowstorm on the edge of the woods. The blurred trees are vertical, the seams of his jacket are horizontal but he is vertical figure as well, and the wind driven snow is diagonal. Add the elements of texture and space and this work is dead on to his source of inspiration, the work of William Eugene Smith whose figure is in a circular composition.

There is more to see in this small but very strong show at the Museum. Good job to all these students who put their work on public display and I encourage the viewers to purchase a rising star or two as the prices are extremely reasonable and well worth your investment in their future. 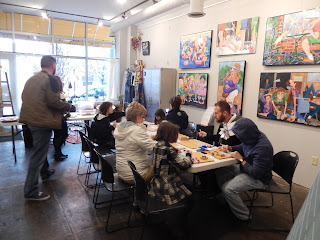 This past April First Friday was our best yet! Thanks to all the PR from Dan Kane and the Rep, we had people coming in just to see the store and participate in our project, many who had never ventured to the west coast before.  Hopefully we can keep that energy flowing. Letter Press Jess and Canton Clothing open officially next month so our little corner will be the place the BE!  Maybe the new tree wraps helped bring good karma as the olds one had faded. Our birds were certainly a happy flock (and Booger the squirrel even got into the new feeders like his own personal seed scooper).  The sunflowers are starting to poke thru the grates (or were until the snow came), but spring is here and so are new creations from our studios.

Our Community Participation Project was “We are of one cloth”, which asked visitors to decorate a 5” square of fabric that I will sew into a wall hanging/quilt.  Now people…… do I really have to spell out exactly what is expected? I can’t count the number of people that read my sign asking for participation in a “community quilt’ and they thought I was expecting them to sew.  Once that fear passed, most were willing give it a try. Stamps and pads were provided (giving a little head start on design options) plus markers and crayons. The results are incredible and not one inappropriate or censor worthy one in the bunch. However….your work stations were left in a horrendous mess this time. Missing caps, lost stamp pad lids, stamps all over the place…..hmmm…..no candy dish for you next time!

Notice that there are NO professional athletes in this group?  For a football town, I am very surprised that no one would hand over the nuclear football to someone who knows how to carry one.
Next month will be open studio supplies and a clothes pin show as I will be on an excused absence from the office. Extra security is being brought in and lots more new fashions will be on our racks. The Community Quilt will be done so come see your work on display. Much love to all who come out and play every month and leave you mark.

PS – Mother’s Day is coming so shop early for a one of kind gift (or gift certificate if you don’t know someone’s size and taste) Plus Flag Day, Fourth of July, Birthdays, Showers, Weddings etc…!!!  Don’t buy another bouquet of flowers or an engraved dust bunny breeder…..think outside the box and come into the Studios.
Posted by Judi Krew at 11:38 AM No comments: