Are your toesies feeling a bit chilly? That would be the beginning of Hell freezing over. No, not because of the C-19 virus, but because I decided to bake something. No biggie to you all most likely. To me however, check out the date on the bottom of the baking powder can, that should tell you the last time I used it. 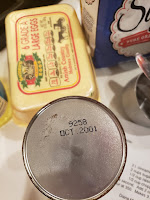 My daughter in law and my future daughter in law can zippity-do-dah their way around a complex delectable treat and only dirty one pan. Me… I had to figure out which pan on that top shelf of unused bake-ware deserved to be dusted off and made to feel useful again. The recipe said to pour into a pan….well shucks all mighty miss recipe contributor, could you be more specific? But I digress, let’s start with how I got to this point.

Rotten bananas. They are to blame. I must have hoarded bananas. I recall that rotten bananas are used to make banana bread! Such a genius I know.  However, a hazmat trip to the grocery store turned up no boxes of mix (an aisle of the store I have never ventured down) that required bananas as part of the process. Really? And you call yourself a banana bread mix? Bull crap. So I bought a mini carton of eggs. Everything requires eggs right?

Back home, fully sanitized and ready to work some magic, in the drawer that hardly opens because it is so full of receipt clippings, (someday it will be excavated to find petrified chopsticks) I found one of those cookbooks where members contribute their favorite recipes. It was the New Neighbors League book from 1992, a group that kicked me out when I moved here, so much for being neighborly. Blame it on my second child, he was hungry and they had a no children allowed in the meetings policy. Anyway, yes, there was a recipe for banana bread. Now I am not a fan of things with too many ingredients if I have to assemble them. I won’t even read a comic strip if it has too many words, they are supposed to be pictures. So below is a picture of my assembled ingredients. As I said, the baking soda was rather expired, but my husband said it would still be okay. The sugar had to be put thru a chipper shredder, the flour must be original to the canisters I bought for our first house in 1986 and when you don’t have walnuts, well…..substitute. A nut is a nut. (pictured at the end, my improvised secret ingredient)

The recipe called for vanilla extract too. Good. That was probably fairly new. The recipe did not say when to add it however. Just like the pan thing, some more detail would have been nice. I figured since it was liquid, it went in the liquid bowl. Even though sugar, which is not liquid, went into the liquid bowl too. See, that is dumb, but I am sure Mrs. Davidson explained it during home ec class in 1973 but I was probably busy doodling on the newspaper cover of my history book. Whatever. Sugar dissolves so it goes into the eggs, oil and water bowl. Notice I scored on the egg purchase! 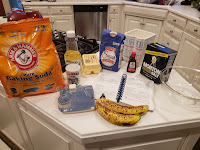 I think my bag of baking powder was intimidating all the other ingredients. He was a bulk purchase baby to replace the old box in the fridge that has been there for years. (You have all cleaned your fridge as part of the stay at home routine right?) So I successfully combined all these ingredients, which by the way, are listed in a different order than they are combined, that is dumb too. That is why I don’t like recipes. List the ingredients needed in the order in which they will be combined. Common sense to me. I counted 4 bowls and lots of utensils that were dirty by this point.  Finally I got to mushed up the rotten bananas, resisting the urge to use all 4, not just the 2 needed. Hubby the chemist said if it says 2, use 2. Improvise on the taste not on the quantity. Fine. Fork over your bourbon pecans, they are the new walnuts. Loaf pan selected, batter poured in and pop that puppy in the oven. The recipe gave two different temp options depending upon your type of oven. What? It’s an oven, it only has one set of numbers on it. Fine. (exasperated sigh inserted here)

55 minutes later, in went the knife to test done-ness. That part I remember because I always laughed that one got to murder the poor bastard prior to eating it. Gotta make sure those bananas and nuts are good and dead!

Out came the loaf pan and onto the cooling rack. Those little rack buggers were a bit entangled in that skinny cabinet that holds cutting boards and cookie sheets (which I call glue gun trays). Neither of us could recall when to take it out of the pan so we decided right away was a good choice. Most of the finished product cooperated, the bottom decided it would rather shelter in place so those calories don’t count.

I still have 2 rotten bananas. Actually I have enough ingredients to try this again. If neither of us has food poisoning by tonight, then perhaps I shall attempt a second loaf before putting that pan back on the highest shelf with the spring forms, muffin tins, and assorted bake-ware that probably put out a missing poster someplace when their buddy took an unexpected pleasure cruise through the tropical heat and the waterfall box.

So….that is my saga of Snarky vs the rotten bananas. I wonder what other items are lurking in pantry? This could get interesting….. Thanks for reading! Wash your hands!!
(Walnut schmalnut!) 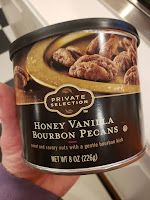