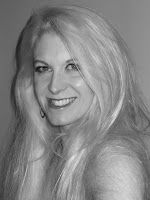 Labels: My PR shot for the poster....Goodness I love that smudge tool on photoshop. 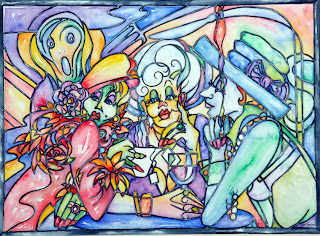 I have found that it is really hard to write snarky essays when one is writing a term paper. No, it is not for school or a research situation, but hopefully will eventually be read and used by thousands of youth across America. No, I am not at liberty to fully explain who or what the project is for as right now the initial rough draft phase is drawing to a close and the resources and illustration/imagery process will begin. Some of you artist types may be getting a request from me asking for your participation by allowing your work to be published with “courtesy of” credit in the rear. But that is another day.
The hard part has been to take complicated concepts and processes and reduce them to as little as three lines or one paragraph.  Something which we consider so simple, such as “shape” is really rather complex to explain. Trying to provide a tutorial for watercolor painting in 100 words or less really challenges the brain cells to edit. I don’t like to edit down to the core as you well know by now.
In having to relearn the basic elemental building blocks of art and then prioritize some principles of design, this process has not only been a trip down memory lane, but also a good lesson on just what is art?  That question is one of the last sections I have to write, and answer, in about half a page of standard text.  Naturally I put it off until last and I am glad I did because recent FB postings have provided some fodder for the trough.
Stephen M. had a challenging interaction with a college professor, Erin M. was questioning the need for and role of statements in the art process, and so too have other artists posted questions about what and why and how as well as how dare they.  In reading the exchanges, the viewpoints, the opinions, the emotions….it dawned on me that I have to condense the whole of “art” into a few paragraphs, maybe a page or two, and that includes art history, philosophy and social purpose so a 12 year old can grasp it. Why me? Well….rule number one, don’t criticize something unless you want to be the one to change it and number two, always re-read number one.
Of course there are good things which have come from such a process. All my old books have been dusted off and the dried up slips of paper which marked different pages are all over the floor, some with notes from long ago. A world of imagery long since forgotten now fills my mind. Alas, the references and resources stage lies ahead as well and I think newer versions of my favorite art books are surely out there. A copyright of 1974 might be just a wee bit “old”. Internet sources have to be included too which means checking each one out for appropriate content (no nudity, these are adolescent boys….). Yep, I am going to surf the net for nudes…just like the rest of the American public evidently.
So on that note…..Snarky is a bit silenced for now. Deadlines are looming and my mental midterm is only a week away. For being a three letter word, “art” sure covers a lot of ground. The guys who are rewriting the reference books for sailing or shooting have it a whole lot easier that’s for sure.
Posted by Judi Krew at 7:17 AM 3 comments:

Pandora’s Can of Bait 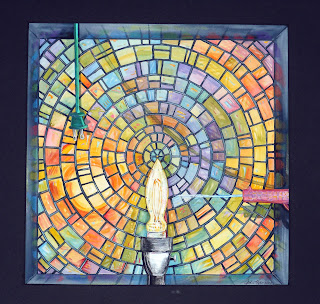 Labels: watercolor of years ago... 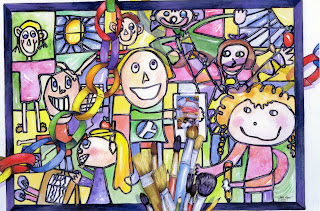 I just read on FB this morning that two of my fellow artists are leaving our work/exhibition space. Both for the same essential reason, children, one will continue to paint and one has chosen to set aside “the making of art” for the time being….perhaps until the nest empties. Because FB has a different format for writing, what I want to say does not fit, therefore, this one’s for you my friends!
Good for you! It is a rough and tough choice to tame the inner creature of creation for the sake of others. As I sit up here smugly on my empty nest (one migrating bird still asleep upstairs), I sometimes wish to be out there flying after the former tenants once again. But that time has passed ALL too quickly and never to return in the way it once was. Those years live on however in all the creations made by them, for them and with them, that one would never call “art” but are worth more than any mega-million dollar Monet.
For those with daughters….you can look forward to picking out dresses, shoes, jewelry and the battle between popular and appropriate.  There are cakes and cookies to bake, fancy dinner tables to set, patterns to pick out, and maybe scrapbooks to make.  You will use your color sense, your knowledge of design and proportion, and be able to sympathize will the drama because you have lived it yourself.
For those with sons…there are toys that rival the construction of the space shuttle, structures built in the woods from found objects, cool car accessories to track down and wardrobes to assemble that feature the colors black and beige.
Maybe you have already painted a mural on their bedroom walls, some long since painted over except or one pterodactyl lurking over the doorframe. Your kids will get awards and earn certificates that cry out for creative matting and framing!  You are the “cool mom” who always has a 5mm google eye in a bin someplace or can help whip out a book cover poster the night before it is due. You are the one on call when the teacher needs a bit of help with some art project or the school has an event which could use some creativity.
Your talents to think beyond the usual or to focus in on the most minute of details will serve your children well.  Creative people see many sides to one issue and can pick and choose the pieces needed to solve a 6am crisis or know when to shut up at 6pm and just listen while the story that flows out.  You will doodle on napkins or music programs to pass the time waiting. You  will pick up the messes and rearrange the throw pillows, hang stuff up and fold things into baskets (socks and towels can become little sculptures ), develop complex imagery around yet another unidentified stain and track down solvents to remove then….or not.  And if not, well those jeans will be a craft project someday, trust me.
As much as it sounds cliche, I have been in your shoes and walked the same pathway ahead of you.  From the head of the trail, it seems like a long road of sacrifice and frustration (as artistic juices build up in your system often to the boiling point which is when the laundry room gets painted hot pink…..), along the way you start to notice the shape of the trees and point out linear patterns, light and shadows, and some scientific facts about perspective. As the forest around you begins to thin out, a sense of desperation will set in, did I do all I could? Did I give them the skills needed? Did I spend enough time? Why did I not play more board games or make more cakes shaped like panda bears?
Suddenly the boys will be in front of you opening a door. Papers will arrive by email that need proofread in an hour or two (so just  correct the commas and balance the verbs). Girls will be along for the shopping trips telling YOU what looks appropriate when all you want are the zebra print heels and a shorter skirt, saggy knees be damned!
So yes my friends, your art and creativity will never cease, it is not on a shelf or put on hold. You will only be using it in a different way to build, create, shape and decorate living sculptures. Think of the time as one long piece of performance art.  When all gets quiet down the road, look around your studios or in the bins and boxes long since packed on the shelf and think HOT DAMN!!! I got time to play and make and build and create and draw and… and…and …and……darn it, I wish I had somebody here to watch me, interrupt me, tell me it looks good or ask what I am making.  But since nobody is here to do that….guess what they get for Christmas next year!
Enjoy your time away from the studio/gallery.  There will always be a place to create and show your work , but your most important projects right now are only around for a very short time all things considered.  I applaud you!
Posted by Judi Krew at 8:42 AM 3 comments: