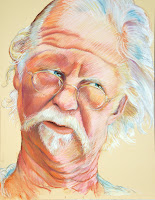 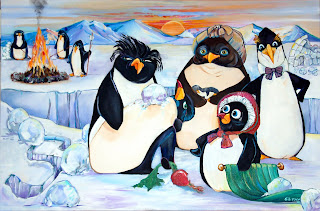 So far this empty nest is more like a haven for migratory birds.
Remember that saddle I was supposed to be back into? Well….guess I forgot to hitch up the belly strap because I fell off it again. Good intentions count for nothing so I apologize for not getting out and about to see the shows and snark. Somehow all my “free time” that everyone mentioned 6 months ago as being a big issue has yet to materialize. I am truly okay with that because I could use a whole lot more free time to balance all the art project time currently occupying my allotted hours of life.
When not behind an easel or over at the shipping place (ever notice there is no frequent shopper card for fex-ex?) the sidewalk has called out again now that the grass has agreed to slow down just a bit. Walking produces an endless stream of ideas, random thoughts and unpublished rants all of which I seem to forget upon returning home which must be a form of driveway dementia.
Now and then I can recall an obscure and totally useless line of questioning so I shall share one with you that came up last week among a group of ….um….”middle aged” (good thing none of them read this) friends. Wrinkle cream. Specifically the marketing of wrinkle creams designated as for day use or night use. How does my wrinkle cream know when it is dark outside? What about time zone changes or daylight savings time? What if I work the night shift and therefore it is my “day” so do I wear the night cream or the day cream? What if I don’t take off my night cream and wear it during the day?  Such musings are what happens when one has too much free time. Are wrinkle cream and anti-wrinkle cream the same thing? Maybe I am causing these wrinkles because I used the wrong one and I should be anti-wrinkle-ing instead. But then I could buy anti-aging cream which may but a stop to not just wrinkles but also hot flashes and gravity affected body parts. (which would be one ugly label). If I could get a night time anti aging cream maybe I would wake up looking years younger….I think someone made a horror movie with a similar plot.
Maybe I should just go back to drawing…..
Thanks for sticking around, I will try and be more productive between bird sightings.
Posted by Judi Krew at 7:45 AM 2 comments:

"The Visitor" A Solo Show by Nancy Stewart Matin 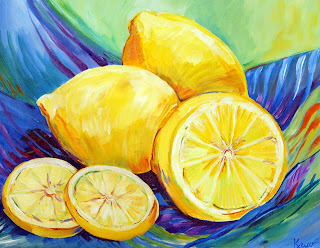 Our current weather may be a bit gloomy, but the Little Art Gallery at the North Canton Library is literally sparkling with color and vibrating with energy courtesy of painter Nancy Stewart Matin.  Maybe I should say potter Matin, or stitcher Matin, or teacher Matin or how about just fill in something of your own because most likely the description will fit just fine.  The recent About Magazine interview included in the program provides enough background information that I do not need to include those details here. Let’s move on to the good stuff!
I was able to enjoy the show by myself which was too bad. A mom came in with a three year old who had no desire to be there (the kid did not, mom wanted to see the paintings.)  But having been in her shoes I can see how mom chose to give in and leave. But what a missed opportunity to engage the child and have a bit of fun exploring the colors, the shapes, the textures, the hidden images and so forth, so many things to use for positive interaction. Pick up the child, read the title “Tunnel Vision” and ask if she sees the tunnel? Where does she think it is going? How many trees can she find? And so forth…. Someday I will step in and speak up, playing teacher once again, but this was not the time. Fine….I can play by myself as me and my inner loaner have lots of experience at back and forth conversations.
“Tunnel Vision”, a watercolor collage is one of several I have picked out to specifically mention. Why? Well I want to make you aware of some different elements of her work and then at the end, hope that it all makes sense to you.  This piece is primarily two large elements from one “painting” torn and laid in such a way as to create a tunnel shape, a rough edged inferred shape that rests on an open work fiber giving the impression of a distant cityscape. Think Central Park in a neon fireworks show.  Plus anything with hot pink can’t go wrong.
“Clothes Horse” feels like much of the same paper source, but used in an entirely different way with the location of markings strategically chosen and placed (flower on the T-shirt). The forms are cut out and hard edged. I wrote the phrase “a search and rescue repurposing of markings that had no home”.
“Zoar Sunset” is yet another approach to imagery. Only one sheet of paper is used with the intent to find the picture and pull it out of the surface by adding shapes, textures and tones to define forms. The use of an orangey pallet is quite difficult to pull off but Nancy does it with confidence. It is so easy to muddy up a watercolor with wrong choices and one would think that green could do so, but her experienced hand (or just saying “what the hell I’ll try it attitude) came off with much success.  Do not pass this one up, look closely at the subtle textures in what may be sky or forest shapes or night clouds as my Dad used to call them. This layering of darker and darker pieces to find forms is reminiscent of the technique used by watercolorist Judi Betts.
Commanding the premier spot at the back of the room, and rightly so, is “Moonstruck”, a large watercolor collage.  The ripples and layers of the papers echo the corrugated mat surrounding the piece. Those things are just physical however. Look beyond at the emotional impact made by three key elements which work in harmony to set the scene and make for a composition that seems effortless. Try moving the forms around in your head and the painting will just not work. Nancy placed them  just right which is perhaps more by her natural instincts than by trial and error as there are no false attempts on the paper surface. First is the sharp edged white moon, the circle of light that first draws our attention because of the contrast. Next is the more freeform architectural marking in the opposite quadrant. The positive/negative shapes created by the edge line suggests multiple buildings with only one flat form needed. Kudos on that shape! In quadrant three (yes there are 4 quadrants in most paintings, but only three should ever really be used completely) are spidery trees, even less defined and setting the sense of landscape and distance.
So how does this all tie together?  Long paragraph short, one of my thesis papers back in the days of typewriters was entitled “Experiments on the Consistency of Variation” which sought to prove that though an artist can try many things, many styles, and many media throughout their career, the natural inner voice will override all of it. A creative spirit (or however one wishes to define the inner muse) guides outward expression no matter how much we attempt to give it a different direction because that creative spirit is the heavenly gift we were given, the one we really don’t understand. Nancy’s body of work in this show is the true outward display of a consistent inner spirit. Her colors are hot and bright, her shapes are carefree and her surfaces are manipulated, no matter what media she uses or what subject is explored. So to sum up this review….the babe can paint and she has a great time doing it! Oh and one more thing…she signs all of her pieces, including the fabric ones. Good girl.
Posted by Judi Krew at 4:54 PM No comments: